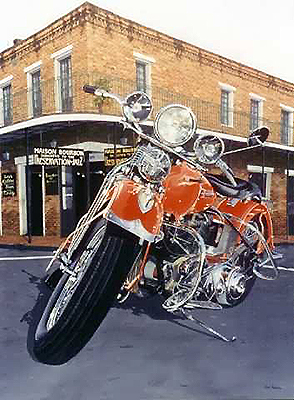 In 1903, three men from Milwaukee had a really unique view of what they thought motorized bicycling should be. In a 10 X 13 foot shed, with borrowed tools, and some metal, Arthur and Walter Davidson along with Bill Harley set out to build the very first Harley-Davidson motorcycle.

Using only a three horsepower engine, the trio designed a unique loop frame, which would set it apart from any other cycle in its time. They would go on to build a total of three bikes in their first year. In 1907, the eldest Davidson brother, William, joined the team. Later that same year, after building 150 bikes, these four men followed their vision and incorporated what is today The Harley-Davidson Motor Company.

The following year found the company employing a total of 18 people and expanding into a 2,380 square foot production facility. In 1920, Harley Davidson became the largest motorcycle manufacturer in the world, boasting dealers in 67 countries. Also that same year, only thirteen years since incorporation, Harley Davidson enjoyed an incredible 5000 percent increase in sales.

In 1995 the company experienced the best year ever with record sales of 105,104 motorcycles. Though we look back and see many changes in its design, Harley Davidson has not changed. It has remained successful by remembering its heritage.

History of the Knucklehead

The term “Knucklehead” comes from its unique look. The top of each rocker box resembles a fist. The Knuckelheads were available from 1936 – 1947 in two models, the EL and the FL. The EL model was manufactured from 1936 – 1940. This bike had a 61 cubic inch (1000 cc) engine. The first few produced had exposed rocker arms. The EL made many significant design changes. It was the first model to use an oil circulation system, which was much better than the total loss system used on previous models. It was also the first Harley-Davidson to use the overhead valve engine and double loop truss frame. With the new handshift four-speed transmission, they also improved its looks by using a shorter, more graceful, rounded teardrop gas tank, and wrap-around oil tank. In 1941 Harley-Davidson introduced the FL model which had a much bigger 74 cubic inch (1200 cc) engine.

Artist Jim Jordan has chosen to make the 1947 Knucklehead FL the first in a series of Harley-Davidson motorcycle prints.

The city of New Orleans is a maze of ancient and lovely architecture. On the downtown side of Canal Street is the Vieux Carre, or the French Quarter. On the corner of Bourbon Street and St. Peter stands a wonderful example of the old style ironwork that makes New Orleans architecture unique. The Maison Bourbon was first a private home later converted to a grocery store. About 35 years ago, the Montalbano family converted the old grocery store into a nightclub. Today, the Maison Bourbon is the only Dixieland Jazz Club currently in operation on Bourbon Street .

“On this site in 1897 nothing happened.” A brass plaque bearing this statement can be found on the interior door. During the Civil War, many of the buildings in the French Quarter were used by the military. Since the Maison Bourbon was a private home during and after this time, the Montalbano family felt it was important to make this tongue-in-cheek statement.

Artist Jim Jordan has captured the pageantry and passion that is the Maison Bourbon. His attention to detail and commitment to the preservation of New Orleans architectural history is what will make this work “Unforgettable.”