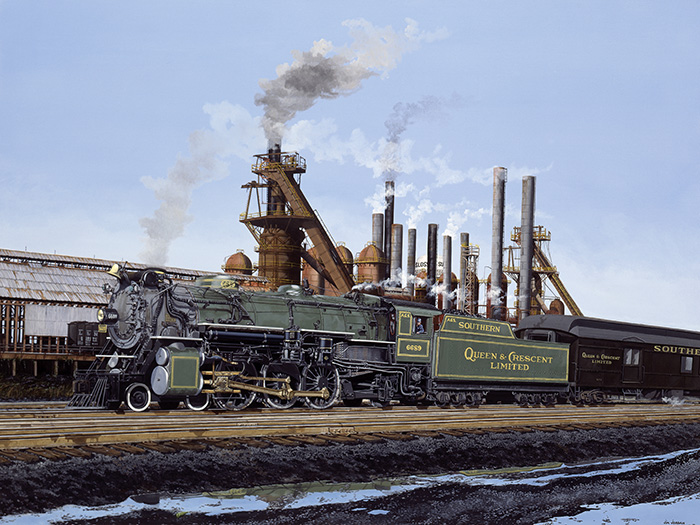 Southern Railway’s green and gold PS-4’s, “First Ladies of the Pacific,” were created in the classic tradition of standard railroading between the 1920s and the 1930s. SR’s then President Fairfax Harrison was vacationing in England in 1925 and admired the brilliantly styled designs of green with gold leaf trimming on the London and North Eastern engines. He set about immediately on his return to use a similar color scheme on these new engines. The appearance of the PS-4’s on the AGS lines (Alabama Great Southern) in the south drew great crowds and netted the SR overwhelmingly favorable publicity. The beautifully decked out Queen and Crescent engine – 6689 made her first run in May, 1929 from Cincinnati through Chattanooga, Birmingham, Meridian, and on into New Orleans. Being the typical passenger locomotive she was equipped with all of the Southern’s needs – the ability to pull up to 14 cars with a top speed of 80 miles an hour, and 80,000 miles between overhauls.

The decade between 1928 – 1938 saw the first lady PS-4′ in their glorious, most fashionable years, racing up and down the lines from Washington to New Orleans. But by the early 1940’s with the inevitable competition of diesel power, the “Ladies of the Pacific” were seeing their reign o’er the rails coming to a close. Yet shortly, the PS-4’s were about to make one last comeback. Ironically, it took a world war to extend their reign of glory. The “Queen” and others were called upon for the unprecedented passenger train miles needed for troop movement. Heavy travel made it imperative that steam – the old faithful mode of transport – be kept working to the limits of its availability.

The Sloss Furnaces were built in the 1880’s in Birmingham – the chief center for coal and iron in the southeastern United States. For some ninety years, Sloss was an operating industrial site. Closed in 1971 – unable to comply with pollution standards – it became a National Historic Landmark where concerts at Birmingham are coordinating archaeological and preservation work on site. Volunteers are needed to keep the machinery and grounds in top condition for future generations.

Paralleling the Norfolk Southern railroad tracks, the Sloss’ silhouette looms silently, yet oddly majestic in the Birmingham sky – just another reminder of an era quietly passing, like the stately ladies of steam.

A special thanks is extended to historian and train photographer, Shelby Lowe of Atlanta, for his expert advice and artwork.

This depiction of Southern heritage is lovingly dedicated to my friend, Bill Hayley of Birmingham. It was his love of steam in the south that motivated this historic scene.