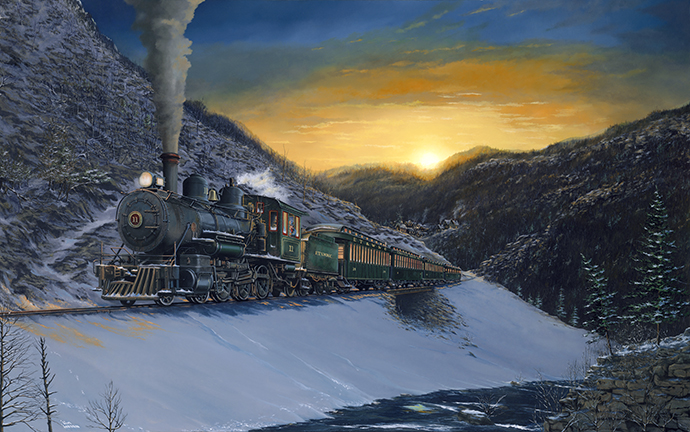 In the Dark days of World War II, and the East Tennessee & Western North Carolina Railroad, better known as the ET&WNC or The Tweetsie, was helping the war effort by runner commuter trains from the depths of the TN/NC mountains down to the rayon plants at Elizabethton,TN.

These plants were working three shifts, around the clock, seven days a week, and the Tweetsie furnished transportation for every shift.

ET&WNC No. 11, built in 1916 by Baldwin Locomotive Works, winds her way through the twisting curving Doe River Gorge with a trainload of tired workers, using most of the passenger equipment left on the railroad. It is Christmas Time 1943, and the passengers in the swaying coaches are undoubtedly dreaming of holidays before Pearl Harbor. After the war, passenger service ended, and the narrow gauge ET&WNC made its last run in October 1950.