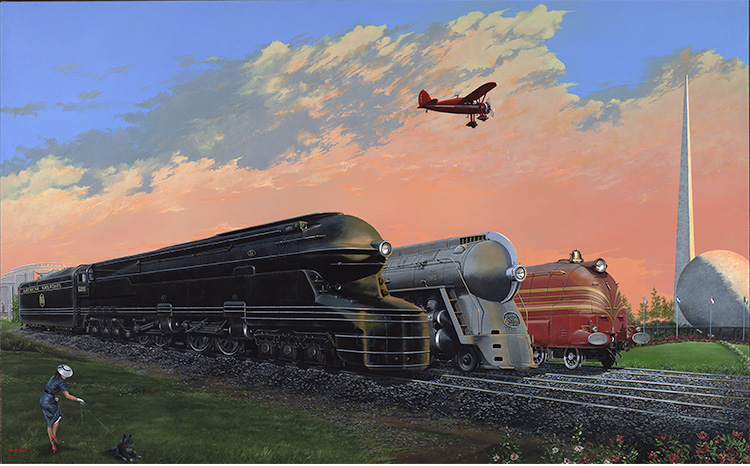 The year was 1939 – three of the most iconic streamliners of the era appeared in one location in New York City. Located at the World’s Fair in Flushing Meadows, the Transportation Zone “Railroads on Parade” exhibit was a conglomeration of steam locomotives from the 1820’s to the present. Engines like the “John Bull” and “Tom Thumb” sat proudly with the company of the new, fast streamliners of the 1930’s. Four times daily in the Railroad Building, 3000 spectators watched as live engines and 250 cast members paraded by and reenacted a chronological representation of the development of railroads in the United States.

With the backdrop of the fair’s central theme – the Trylon and Perisphere, the Pennsylvania Railroad’s leviathan S-1 sits in the foreground. At an overall length of engine and tender of 140+ feet, the S-1 locomotive was perched atop rollers which allowed it to run at a speed of 60 MPH on a “static” display for the duration of the fair. The New York Central’s 20th Century Limited Hudson “Dreyfuss” J-3a sits in the center position of the painting. With its large vertical fin, the engine stands the test of time as being one of the most beautiful and well recognized engines ever designed. Imported from Great Britain, the record setting “Coronation Scot” decorated in crimson and gold livery made British history by attaining a top speed of 114 MPH. The engine was used by the London, Midland and Scottish for an express service between London and Glasgow.