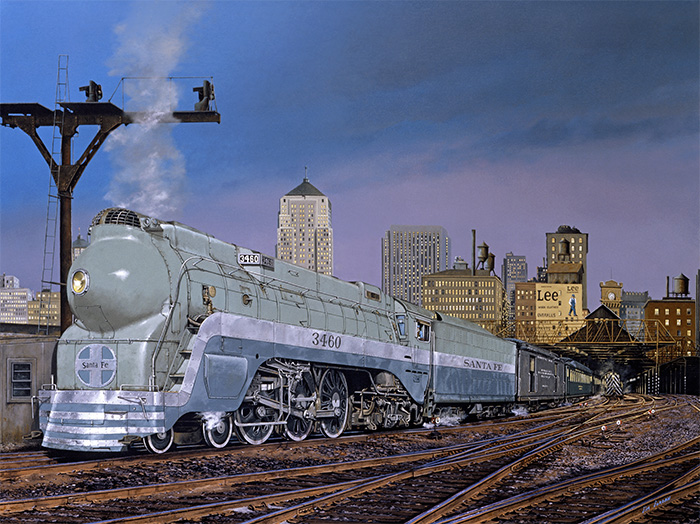 The 3460 arrived from Baldwin mid-January 1938, destined to become the most famous steam engine in the Santa Fe line for the balance of the steam era. Even the general public noticed the contoured engine that blended into the new streamlined passenger cars and painted two-tone blues with silver leaf striping and chrome cab fittings. The 3460 was on the rail only a short time before being nicknamed the “Blue Goose.” For the next 18 years the name stuck and was used by engineers, dispatchers, operators, mechanics and every fan of Santa Fe locomotives.

Being a “Fast Mail Express” with passenger cars, it had a lot to prove. How fast were the 3460’s? Perhaps one of the engineers was correct back in 1938 who responded, “We’ll never know, as nobody will have the guts to open one all the way up.” But several documented rides have noted over 110 miles per hour before slowing, leaving brake shoes “glowing red hot in the broad daylight.”

One of six train stations in Chicago (more than New York and Los Angeles together), the Dearborn station was all about trains – not especially the architecture. Built in 1885, it was a notable example, though, of Romanesque Revival style. It still stands as one of Chicago’s lone example of downtown station reuse. It had a maze of tracks and express buildings that long ago gave way to a sprawling condo development.

Dearborn was the most pluralistic of the Windy City stations that embraced one and all to its modest waiting room and small but cozy train shed. It boasted movie-star patrons of Santa Fe’s “Super Chief,” small town folks headed for home aboard Monon’s “Hoosier,” and rush hour commuters aboard the Chicago & Western Indiana. Chicago and Easter Illinois, Erie, Grand Trunk Western and Wabash helped round out the cosmopolitan lineup.